Two for one. Learn how to track dinosaurs and read their footprints AND see how they lead to the door of Noah's Ark and the gospel.

A Beginner's Guide to Tracking Dinosaurs 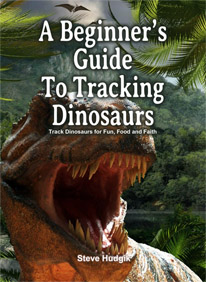 Imagine you have a time machine and can go back in time to photograph dinosaurs. In A Beginner’s Guide to Tracking Dinosaurs you will learn how to identify and track dinosaurs. By chapter eight you will be able to estimate the dinosaur’s size and how fast it is traveling. You will have the skills needed to tell an herbivore from a carnivore, so you can avoid becoming a quick snack for a raptor. You will even learn whether or not dinosaur meat is good to eat. In addition, this guide will help you figure out how far back in time you need to go, and what type of people you can expect to meet. Everything you need to know!

But there is more! As you are learning to track dinosaurs, you will also learn how dinosaur tracks and eggs provide powerful evidence that Noah's Flood is real. And as we determine how far back in time you need to go, you see that there is no evidence for dinosaur to bird evolution, and that evolution is actually impossible... including human evolution. The physical evidence is all laid out in a logical, easy-to-read, step-by-step manner that leads to the open door of the Ark foreshadowing salvation through Jesus Christ.

218 pages, with over 55 illustrations and photographs

The real deal. Dinosaur tracks made by real dinosaurs. And they have A LOT to tell us.

- Dinosaur tracks are found on flat bedding plains... with no vegetation. That's very strange. Plants start growing very quickly. Dinosaur tracks were supposedly made during a wet season. They dried and hardened during the dry summer. Then they were buried during the floods of the next wet season... YET, there are no signs, none at all, of any vegetation even starting to grow. Just flat mud plains that in some cases go on for miles. (These tracks come from a 50 mile stretch of the Connecticut River Valley that is filled with dinosaur tracks).

- Individual tracks are clear and not damaged. What's the big deal? These were supposedly made on a lake shore. Dinosaurs coming and going would have damaged (walked on) even dried tracks.

- These tracks come from a dinosaur track quarry where they have dug down six feet through thousands of layers of sediment. Throughout all the layers the tracks are continuous and are the same, made by the same type of dinosaur and no other animals. That's about 25,000 years of the same dinosaur, and only that type of dinosaur, walking on a lake shore that never changed. That's hard to believe.

- The tracks are over 99% carnivore tracks. Huh? Normally the ratio has to be 10 to 15 herbivores for each carnivore. Where are all the herbivores? What did the carnivores eat?